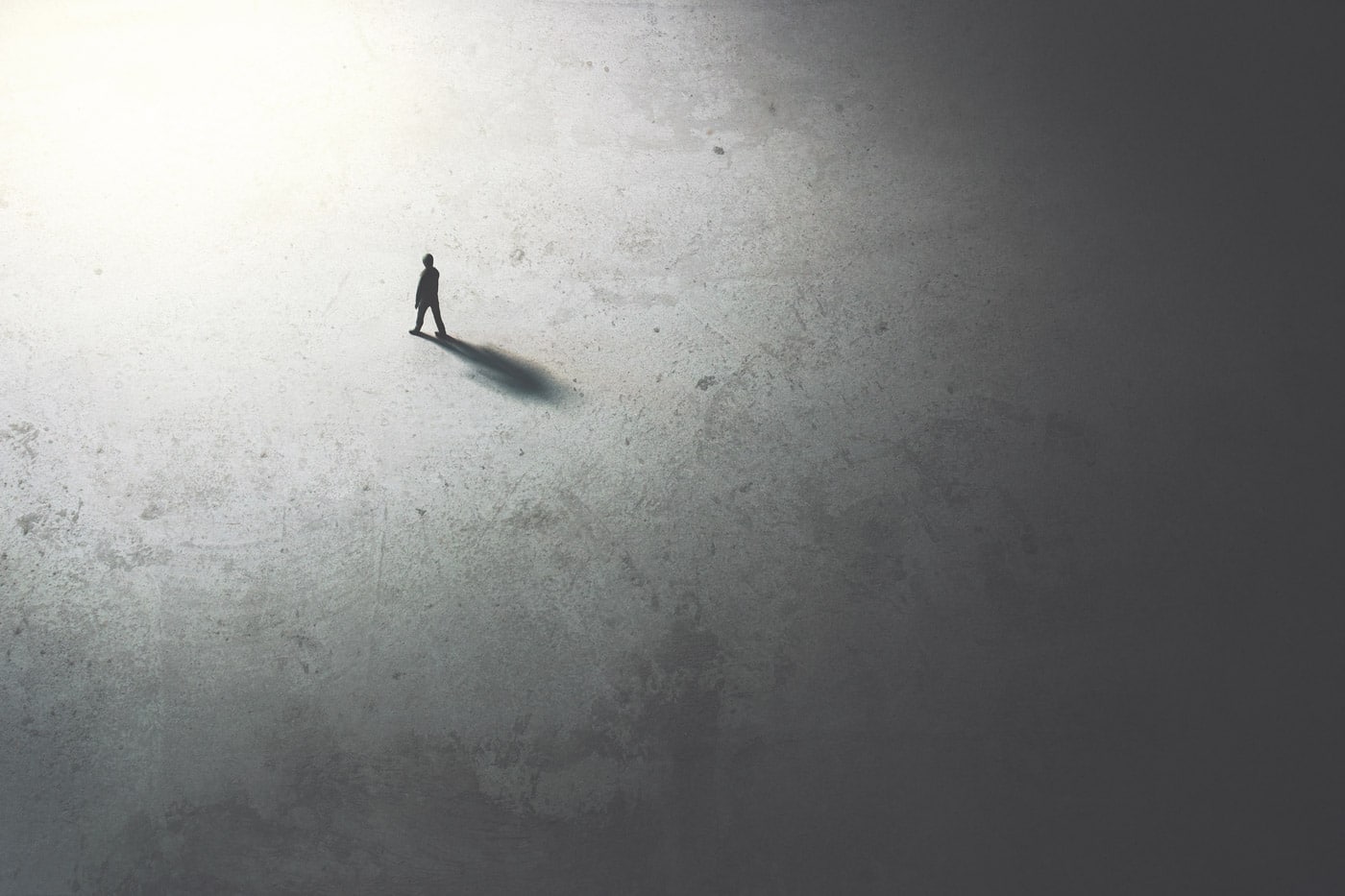 Book Review – Michael Huggett
The Psychological Journey To and From Loneliness: Development, Causes, and Effects of Social and Emotional Isolation

Identifying the stigma that surrounds loneliness within Western society, Rokach states that his mission is to “…help get loneliness out of the closet. To normalize it, and address it as we do with other human conditions that are too painful and from which we may seek refuge” (ibid p50). Elsewhere in the book he asserts that, “…the drive to avoid [loneliness], a sense of isolation … constitutes the dominant psychic force underlying all human consciousness and conduct” (ibid 2019 p45) thereby seemingly seeking to universalise  it as an essential human experience, and frame it as a significant psychological analytic concept.

Whilst Rokach’s book takes a broad sweep with regard to the phenomenon of loneliness, covering, among other aspects, historical, sociocultural, philosophical, evolutionary and literary perspectives, the key focus is on presenting the latest research into the development, causes and effects of the phenomenon, examining loneliness across the lifespan in relation to population groups identifiable through ethnicity, gender, marginalization etc. Although there is no direct reference made to sexual abuse within the book’s index, and the topic is not dealt with in specific detail within the body of the work, adverse childhood experiences, sexual assault and mental health difficulties known to be associated with the impact of sexual abuse are identified within the work as being associated with loneliness.

From my reading of it, the strength of the work with regard to its specific relevance to the topic of sexual abuse lies within the sections providing up-to-date synopses regarding research into loneliness and the implications/directions thereof for treatments and /or interventions. Much of this is presented in the form of a literature review for each of the topics (for example, outcomes relating to physical health, mental health, relationships, worker impact etc.) so an attempt will not be made to provide an exhaustive account of all the potential implications and applications for assessment and treatment.

Broadly, however, and being mindful that loneliness and the need for social connections are issues that do arise during assessments and interventions relating to those who commit sexual offences and victims of abuse, perhaps reflecting my background in health, the review of the literature available focused my thinking with regard to the physical and mental health outcomes as they related to the phenomenon of loneliness.

When considering those who offend, loneliness is often identified as a potential risk factor both with regard to dispositional traits stemming from early attachments (for example emotional loneliness (Weiss, 1973), and as a situational factor, for example the loss or lack of an intimate partner, in terms of dynamic risk factor, i.e., social loneliness [ibid]). Again perhaps reflecting my own bias/interest in working with survivors, I felt than an opportunity had been missed, in that the specific impact of childhood sexual abuse did not receive greater focus within the book, particularly with regard to victims of such offences. Rokach observes that: “Those tormented by psychological disturbances also experience loneliness when they struggle to contain their problem, and when they attempt to hide it from others” (ibid p173).  Given that the psychological disturbances and resultant loneliness springing from this childhood sexual abuse is also amplified and frequently deliberately cultivated by the grooming actions of the abuser, I found myself hoping for some greater emphasis on loneliness resulting from the actions of others, or coming about as a result of institutional and structural causes.

For example, where sexual abuse creates difficulties that lead to the diagnosis of a distinct mental health condition, Rokach broadly acknowledges that adverse experiences such as “…emotional and physical neglect/abuse and family chaos, economic problems, and having been bullied” are frequently associated with adult mental health disorders including borderline personality disorder [BPD]”, a condition whose sufferers, he identifies, “…often feel rejected and lonely” (p130). As a specialist working with those in receipt of this diagnosis, whilst a sense of rejection and loneliness is common to those with a BPD diagnosis (with this frequently linked to attachment trauma), I am aware that studies have revealed that the rejection experienced also has a tangible, ‘real world’, concrete basis, in terms of interlinked ‘rejecting’ staff attitudes to those with a BPD diagnosis, and the institutionalized exclusionary practices by healthcare providers that often come about as a result of this (Markham [2004; 2008]; Woollaston & Hixenbaugh [2008]; Sulzer [2015]).

In terms of treatment/intervention implications with regard to loneliness, Rokach summarises the literature on loneliness reduction strategies as being underscored by 4 major modalities, namely “…improving social skills, promoting and enhancing social support, increasing opportunities for social; interaction and connectedness, and challenging and transforming maladaptive social cognition held by lonely individuals” (ibid p247). Whilst there are no great revelations here (The Good Lives Model, for example, emphasises the importance of ‘relatedness’ and ‘community’ with regard to sexual offending, and social skills training (SST) and cognitive behavioral therapy (CBT) are stock mental health treatments),  I did feel that utilising the lens of loneliness would be useful for focusing the planning of intervention work.

Although stigma may surround loneliness within our culture, those of us working within sexual risk are experienced in addressing difficult and highly personal subjects and are ideally placed to explore this topic through our work.  In my experience we do acknowledge the impact of this when assessing and formulating interventions for both those who perpetrate abuse and their victims. This is not to say that the research gathered within Rokach’s book isn’t of value in terms of directing our attention to areas that we may inadvertently overlook (for example, the impact of loneliness on physical health and substance misuse). However, if the strength and relevance of the book to sexual risk practitioners is deemed to lie in the presentation of empirical research, as intimated above, I found the broader discussions less satisfying.

The author makes numerous references to today’s society being, “…not as cohesive, close-knitted, and involved in its members’ lives as it was in yesteryears” (ibid p4). He acknowledges what he deems to be societal trends, suggesting that, “intra- and international violence is rapidly growing” (ibid p29) and that “…intimate and social relations have replaced, as a self-esteem affirmer, work that was fulfilling that role just several decades ago”. He further observes that “[a]t the dawn of the 21st century, our western culture appears to magnify the alienation and separateness that man feels, while at the same time we yearn to belong, to be needed and loved” (ibid p53).

The frequent problematic usage of masculine pronouns aside, whenever comments such as these occurred, I found myself desiring a more critical analysis than was presented. Societal trends were presented as regrettable or ironic facts about our contemporary condition, with little interrogation as to what forces within our culture exacerbate these trends and why others, i.e., the more communitarian cultures referred to within the book, differ. Whilst Rokach’s presentation on the impact of social media and communication technologies might be viewed as the exception, in that he identifies a relatively recent phenomena which appears to causally impact on levels of loneliness within our culture, his emotive description of our “…Facebook/iPhone/Internet infested world” [ibid] may not only cause an eyebrow to raise but may also provoke the reader to wonder whether such ‘infesting’ technologies are essentially alienating or whether broader factors might be at play, particularly given that the research he cites in this regard is not entirely negative on their use?

Concluding, by betraying my ideological bent, I was left wondering why the topic of capitalism, specifically neoliberalism as an ideological and economic force with regard to these more recent western cultural shifts, was missing from the discussion given the potentially fruitful contribution such an interrogation of the topic could have afforded. Durkheim and Marx receive the briefest of citations and, whilst the work of Fromm is also mentioned, their fruitful contributions in relation to modernity, anomie, alienation and capitalism are not presented. To take two relatively recent examples of authors addressing such considerations as a counterpoint, Wilkinson and Pickett’s book The Spirit Level (2009) employs epidemiological data to argue for the impact that inequalities within societies such as the UK have in producing greater psychological dysfunction, and James (2008) has written convincingly, drawing on a range of studies, with regard to a correlation between our neoliberal mode of capitalist production and rising rates of mental health problems.

Whilst as a mental health nurse committed to understanding distress within the context of communities and culture, I wholeheartedly welcomed the author’s critical comments in relation to the limiting individual focus of influential psychoanalytic and cognitive behavioral sciences,” … to the exclusion of one’s surrounding community” (ibid p10).  I felt that this ‘relational’ perspective might have informed further the author’s presentation of gender and loneliness, leading  to a more critical analysis of our contemporary situation.

Citing Nicolaisen and Thorsen (2014), Rokach acknowledges that, “[a]cross generations, differences between masculine and feminine identities are in some ways both reproduced and transformed according to different historical, cultural, and normative contexts” (ibid p85). This acknowledgement arguably opens up the potential to examine how culturally and historically-constructed notions of masculine and feminine identities may relate to loneliness. This seems particularly pertinent to Rokach’s wider concerns, given that the cultural values of ‘individualism’ and ‘independence’ he identifies as characterising western societies are traditionally associated with constructions of masculinity, whereas ‘dependency’ and ‘relationality’ are not only associated with femininity but are also given less worth within our Western hierarchy of cultural values (Becker 1997). A critical approach to gender from this perspective might have shed additional light on structural and discursive underpinnings as they relate to loneliness, inequality and oppression.

I feel it would be unfair to allow my misgivings to detract from the overall potential practical value of this book and I am mindful that it presents a ‘psychological journey to and from loneliness’ rather than setting itself up as a critical text. That said, without this deeper critical engagement, I found myself unable to share the author’s optimism as this related to government initiatives such as the appointment in the UK of a Minister for Loneliness. However, I’m prepared to acknowledge that I am perhaps jaded by my experiences of working as a mental health nurse under this administration.

In summary, given that those working within sexual risk will be familiar with the experience and impact of loneliness in relation to those who perpetrate sexual offences and their victims, I would recommend this book on the strength of the fact that it brings together the latest research in this area, and I will certainly keep my copy to hand when assessing and providing interventions. I did, however, feel that various important dimensions to the phenomenon were not addressed in sufficient depth, as outlined above. Whether the emphasis placed on loneliness as a key psychological concept is warranted is a question I would have to leave to others better qualified to comment.