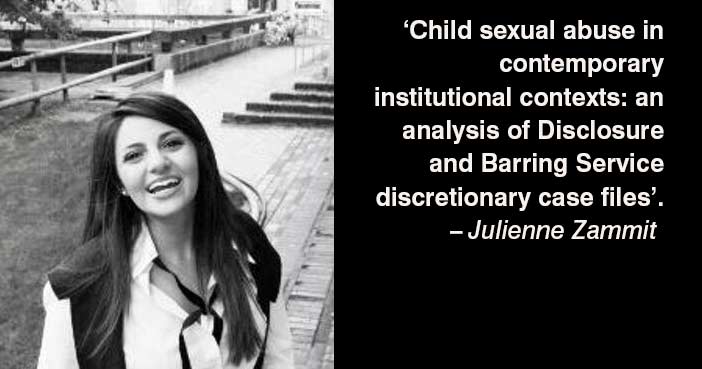 Julienne Zammit is a Principal Researcher for the Independent Inquiry into Child Sexual Abuse. In this blog, she explores some of the key findings of the Inquiry’s newest research report ‘Child sexual abuse in contemporary institutional contexts: an analysis of Disclosure and Barring Service discretionary case files’.

“It was a few years before he was able to accept a hug from anyone because what the perpetrator did to him had screwed him up.”

There is no doubt that child sexual abuse has profound, devastating and lifelong effects on a person’s life. Whilst steps are being made in the right direction, and changes are continually being implemented, one of the key questions relating to the subject remains: how is child sexual abuse still able to continue?

Our groundbreaking new research aims to go some way toward examining this question, finding alleged perpetrators across a variety of institutional contexts used similar tactics and methods to sexually groom and sexually abuse children. Based on analysis of 43 case files from the Disclosure and Barring Service (DBS), our research report explores what is known about the offending strategies of perpetrators across a wide range of settings, as well as the response of institutions.

Whilst there was no single profile that characterised all alleged perpetrators across the cases analysed, the research revealed that they used a range of common, and sophisticated, sexual grooming tactics to target and isolate children.

As well as exerting power and control over children and colleagues, alleged perpetrators – such as teachers, sports coaches and foster carers – harnessed their professional reputations and authority within institutions to perpetrate child sexual abuse undetected. Cases illustrated that they were often regarded as charismatic, competent individuals who were well liked and respected by colleagues. For example, in one case the reference from a previous headmaster described the alleged perpetrator as “a talented and immensely likeable man”. There were several examples of staff and institutions emphasising the alleged perpetrator’s positive contributions to the institutions, which deflected from the allegations of child sexual abuse.

In the majority of cases we analysed, child sexual abuse took place in physical locations away from the institution, such as cars and hotels, enabling alleged perpetrators to sexually abuse children in private and reducing the risk of detection.

“The victim was initially very embarrassed and shy when he was spoken to, but later confirmed they were having sexual relations and at times she had taken him to a hotel …and also bought him substances”

However, these offline tactics were also mirrored in cases where the child sexual abuse did not involve physical contact. In these instances, alleged abusers would primarily use social media or text messaging to isolate the child and perpetrate sexual abuse. Contact with children online or through text messaging provided alleged perpetrators opportunities to be in frequent  – and in some cases almost constant – contact with children, throughout the day and evening, often unsupervised.

More specifically, Snapchat was often the social media platform of choice because it was popular among children and young people, and pictures and messages shared via Snapchat were only available for a short time before they became inaccessible to their recipients. This feature afforded alleged perpetrators a level of protection by minimising the risks of being detected.

Through our analysis, we found that where survivors reported sexual abuse to someone in authority, alleged perpetrators denied or minimised the sexual abuse, or disputed they held a position of trust, in some cases even blaming the victim. Over-familiarity and physical contact between adults and children was also a frequent finding, and in a significant number of cases, sexually abusive relationships were framed as consensual and romantic. This served to disguise abusive behaviours and led to institutions failing to properly assess risk or appropriately handle concerns where such contact was known to have been made by adults with children under their care.

“I genuinely thought [alleged perpetrator] cared for me and loved me, but now that I look back I doubt this has ever been the case. I also believe he made things easy for things to develop and has lied to me all through this, I doubt I ever would have made moves to progress this on my own…”

Our research also shines a light on institutional apathy, describing how institutions and professionals were often slow to respond, missed warning signs, or did not sufficiently investigate early or low-level concerns. In one example, staff did not go on to report or escalate the concerns formally, in order to avoid “causing a stir” or because they did not believe the rumours were substantiated. We also found that in a number of cases, opportunities to safeguard children were missed or actively blocked because the ‘risk of harm’ that individuals posed was not assessed. This included assumptions being made about sexually abusive relationships being consensual, family members of alleged perpetrators holding positions of authority in institutions, and allegations made by the child not being believed or taken seriously.

For example, it was recorded that a sexually abused child had disclosed concerns about a gymnastics coach to several other coaches who failed to escalate or address her concerns. Her disclosures were dismissed as “bragging” and were minimised, as the coaches determined she was making a “big deal”.

As well as a fear of not believed, the cases we analysed highlighted that children faced a number of barriers when it came to disclosing child sexual abuse, a finding reflected in the accounts shared with the Inquiry’s Truth Project and its thematic reports. Whilst some cases revealed that alleged perpetrators strategically groomed children and their families, making disclosure much harder, others described children’s fears that reporting would anger the alleged perpetrator and exacerbate the nature of the sexual abuse.

In some instances, it was clear that cultures of fear, such as power hierarchies within an organisation, were also a significant barrier to reporting.

“I had no one when it started”

Whether it’s school, sports, or foster care, children should not be faced with the risk of sexual abuse, in any setting. However this research report makes clear that despite significant reform to raise awareness and safeguard children from sexual abuse, perpetrators can and do sexually abuse children in contemporary institutional contexts. If organisations are to tackle this issue effectively, they must acknowledge and understand where things are going wrong, and how child sexual abuse is still able to continue. Most importantly, they should take allegations seriously; in order to better protect children, we must listen to them.

Survivors of child sexual abuse can share their experiences with the Inquiry’s Truth Project over the phone, via video call or in writing. Visit www.truthproject.org.uk for more information.